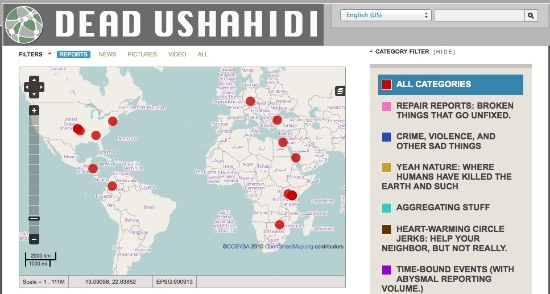 Lots of people are talking about the shortcomings of Ushahidi (see Crowdglobe and Dead Ushahidi). While it’s important that crowdsourced maps be used with an eye towards impact, is the lack of strategy in most instances Ushahidi’s fault? Hardly.

It is easy to launch a map. It is harder to get people to send information into that map and much harder to turn that information into meaning and change. Because many people don’t foresee these difficulties, they never overcome the hump that comes after the initial excitement of setting up a map. Practitioners, donors, researchers and journalists should heed the shortcomings that Dead Ushahidi and the report from Crowdglobe (an Internews project) have pointed out, but Ushahidi should not be expected to fix them. Here are some reasons why:

Ushahidi tools lower the barrier to entry for users who want to experiment with the social or political use of new technologies. That is a feat on its own. Users need Ushahidi to be focused on adding features, fixing bugs and nurturing its community of technologists.

2. It Sets an Impossible Precedent for Other Technology Companies

There is a difference between soliciting user feedback on a product and providing unpaid strategy support to users. Of course, technology companies should do the former, but if communities of users (and funders) began to expect most new tech platforms to provide the latter, then it will be that much harder for them to sustain themselves. Strategy support doesn’t have a place in the business model of technology company – regardless of its profit model – and it shouldn’t.

3. Digital Strategy Support for Changemakers Should Be Tool Agnostic

I’ve never met a member of the Ushahidi team who I wouldn’t wholeheartedly recommend to any activist looking for help. Nevertheless, support in the strategic integration of new technologies shouldn’t come from an organization that develops a single tool. While they would likely understand that their technology isn’t always the best option, or that it should be paired with other tools like online petitions or secure incident documentation systems, that doesn’t necessarily mean they’ll have the time, incentive or even the background knowledge to connect an initiative with the proper tool suite.

Much of the coverage of Dead Ushahidi and CrowdGlobe has looked to Ushahidi for a response. While it’s great that the Ushahidi team has stepped up to the plate to do what they can, I think that we’ll start to see more social impact emerge from crowdsourced mapping projects if technology companies focus on technology, and other actors focus on providing strategy support.