Visualizing Protests For Media-Bias And Sectarianism

Reuters ran a story last month alleging media bias in Al Jazeera’s coverage of the Arab Spring. This spawned a short flurry of online commentary, some posts more vitriolic than others. It also raised the awkward issue of how sectarianism impacts the regional spread and response to unrest, which is worth more considered attention than I have seen it given in mainstream reporting.

The thrust of the Reuters piece was that Al Jazeera, much applauded for their critical role in disseminating information on protests in Tunisia and Egypt (praise rightly deserved), had turned a blind eye to Bahraini protests out of deference to Qatari royal interests.

Despite a wealth of material, there were no stirring montages featuring comments by protesters or scenes of violence against activists in Bahrain. Al Jazeera has produced such segments to accompany Egyptian and Tunisian coverage.

The threat posed by Bahrain’s protests was closer to home. Their success would have set a precedent for broader public participation in a region ruled by Sunni dynasties. More alarming for those dynasties, it would have given more power to Bahrain’s majority Shi’ites, distrusted by Sunni rulers who fear the influence of regional Shi’ite power Iran.

This is a serious charge, especially as Al Jazeera continues to function as a beacon for free expression and independent journalism in the region (and the world, as long as we are comparing relative merits). For less informed news consumers it is an intuitively compelling explanation for the dramatic variance in Gulf reactions to protests in Egypt and Bahrain. As the GCC sent troops into its small island neighbor, and Iraq’s accusations of secular bias derailed the Arab League Summit, it was not difficult to imagine that Al Jazeera might in fact be bowing to Royal pressure.

Indeed, one must assume that some degree of ideological bias influences coverage by any given media organization. This might be due to lack of interest and priorities, as was arguably the case of Western media indifference to protests in Gabon, or  protests around the world that have not been included in the “Arab Spring” discourse.  In a spectacle as highly politicized as the protests and revolutions that came tumbling out of the Maghreb countries in early 2011, one would expect regional, cultural, sectarian and ideological biases to play out in news coverage.

To take a look at whether this was the case, we started collecting data on media coverage in late April. Unable to map radio and television coverage on the fly (as important as they are) we charted the number of online articles within specific sub-domains for a series of media organizations using Google search queries. There were some interesting results (AJ coverage was indeed low for Bahraini protests, which received just one online story from Fox News), but the process was interrupted by a TDS interview sprint at the end of April, before we could collect a full set of numbers . When we resumed data collection last week, differences were immediately obvious, showing almost none of the simple biases we expected along a Gulf / Western split.

In order to put the media coverage numbers into context, we also gathered a significant amount of data to indicate the severity of unrest in each country, including the largest number of protesters reported, deaths and arrests. Both of these data sets were then visualized by Andy Kirk at visualizingdata.com, producing the two-part graphic below. 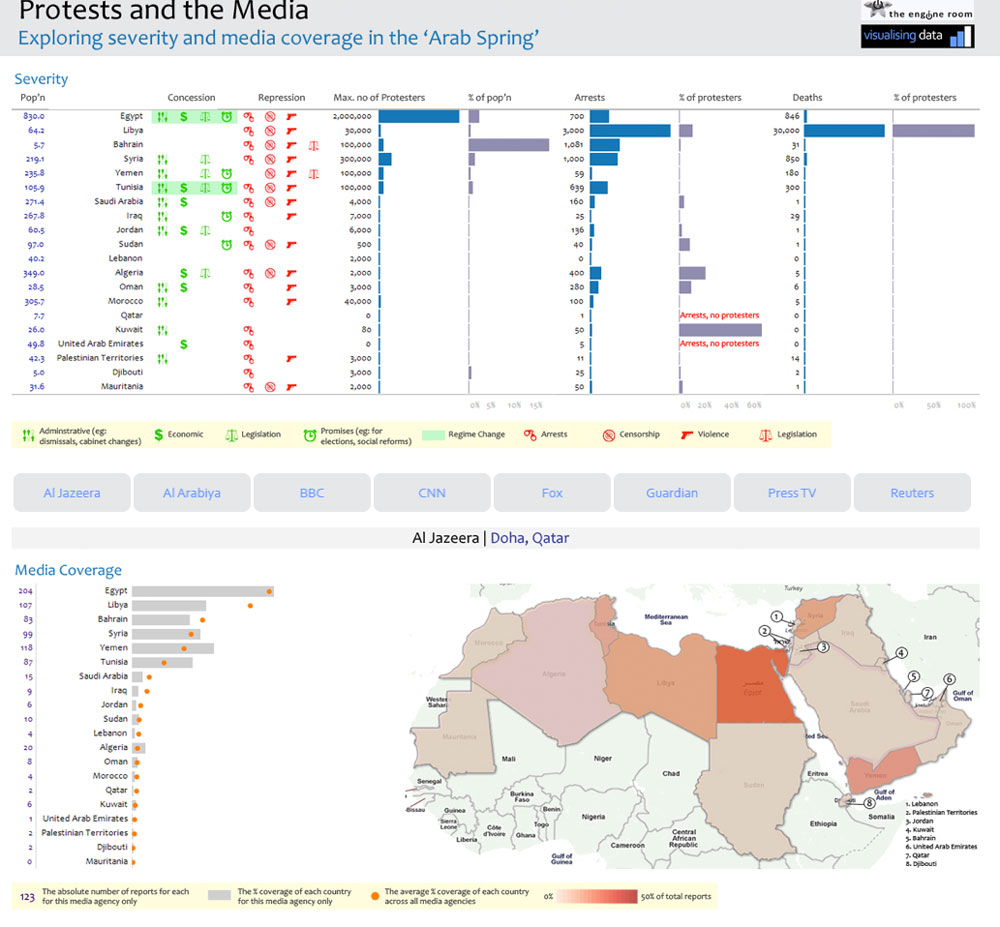 As noted, the resulting maps do not immediately support the biases we sought to explore. Here are a few immediate observations:

Read about the visualization and data in greater detail here. We will be revisiting this with new data (including the Arabic language coverage and time sequencing), and coming back with more in-depth analysis. In the meantime, feel free to make observations or suggestions in the comments below or via email, or try your own hand at visualisation approaches.

We would love feedback and alternative suggestions for how to tackle this complex data set.