Civic Tech and Brexit: We Can Do Better

Last week’s EU referendum has left the UK in chaos. After campaigning offline and online for the UK to remain in the EU, I’ve been wondering: what role did the civic tech community play in the referendum, and could we have done more?

According to polling data from Sky News, only 36% of the British population aged 18-24 actually voted in last week’s EU referendum. Of those who did, 75% voted Remain, which indicates that a higher turnout might have left the UK in a very different place than the chaos we find ourselves in today. They could have tipped the balance – but they didn’t. 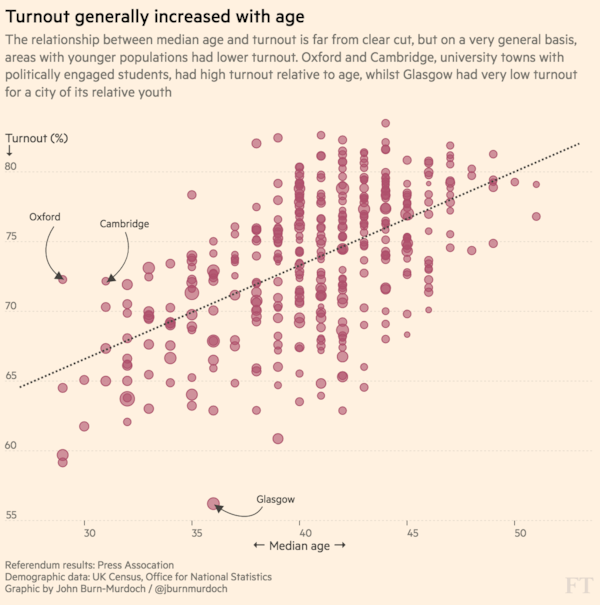 18-24 year olds in the UK are, by and large, digitally literate. 90% of them own smartphones. On average, they spend over 20 hours a week online. Somehow, though, it seems that those devices weren’t used to give them information about why Thursday’s referendum was so important, and why their vote would have counted, as much as they could have been.

Voter education often isn’t an explicit mandate of many civic tech organisations or initiatives, and those who focus on it probably wouldn’t identify with the civic tech community.

This is a huge missed opportunity. Voting (or not voting) in that referendum changed a huge amount in UK politics, and I believe it’s our responsibility to help more people connect to the politics and systems that govern their lives.

By now, it’s relatively well-established that civic tech projects should address a problem or an actual need. But how do we decide which ones to work on?

Tom Steinberg, longtime civic tech guru, wrote in Civicist about his exploration of civic tech’s most important problems. Among them are lots of ideas I find interesting and exciting, like public digital institutions, working with Internet Giants, and improving digital services.

But what about once the digital service has been improved and refined? Registering to vote in the UK is exceptionally smooth, and takes less than 5 minutes. This doesn’t seem to have been the problem here. Instead, it seems to have been an issue around the much less exciting issue of simply conveying to people why they should vote, and what they are choosing between.

Voter education isn’t often a problem civic tech chooses to focus on – potentially because many civic tech initiatives are focused on improving systems rather than communicating messages. Perhaps as a result, recent research has found that civic tech projects in affluent countries are most used by the already politically engaged. Though the current surge in public political energy is a good moment to encourage more use of existing platforms, it’s probably only going to reach those who voted, rather than those who didn’t.

Could it have something to do with the political nature of the topic? Though voting is a civic issue, the EU Referendum was a political problem as much as a civic one, and it was an incredibly divisive referendum. Given the strong correlation of age with voting preference , encouraging young people to vote could be seen as supporting the Remain camp. And lots of civic tech initiatives label themselves as explicitly ‘non-partisan’, though this vote in particular split across parties.

To have a bigger impact, civic tech needs to be about more than increasing efficiency of systems, streamlining processes or gathering data- or perhaps, increasing representation actually is increasing efficiency. Reaching more people, and helping them understand why a political system or institution is so important, should be a core part of what we do.

Sometimes civic tech is political. Being non-partisan is fine, but what we do is inherently political, and we should recognise and even embrace that.

Groups that probably wouldn’t self-identify as civic tech were using technology to address the issue of voter education among young people, in campaigns like Turn Up. Is there more that they could be doing with their use of data and technology?

Perhaps we need to broaden our horizons, and partner with specific groups on specific, important issues – like the EU referendum. We need to choose our problems based on actual issues, and one clear way of doing this is by getting more involved on issue-based campaigns, and especially ones that have such a huge impact on other parts of our lives.

This is harder than improving a particular digital system. Going out campaigning on Thursday was hard for me – getting yelled at, coming face to face with people who weren’t afraid to tell me exactly what they thought about the European Union (and immigration.) It was hard too, on Friday, knowing that we’d lost, alongside my disbelief at what had happened, and the chaos. Engaging on a personal level with people who disagree with my message, and taking my civic engagement from online to offline, was a good reality check for me.

Choosing which project or event to focus our efforts on is difficult, and we need to be strategic – and sometimes, political. What are we trying to do with civic tech? In my opinion, making it easier for more people to understand and engage with political systems – and we’re not going to do that unless we ourselves engage with difficult, political issues.

We had an opportunity to reach out to a key demographic, encourage their civic engagement, and potentially change the outcome of one of the most important elections of recent times, and we didn’t. In this time of chaos and reflection, I’m curious to know how the civic tech community is reflecting on what we all could have done differently.