How technology is used to fight impunity: our take-aways from the International Anti-Corruption Conference

Last month, a group of around 1,200 anti-corruption fighters, policy makers and activists gathered in Putrajaya, Malaysia for the International Anti-Corruption Conference (IACC). Their focus this year was ending impunity and the engine room was invited along to form part of their Technology Hub. Interested attendees could approach technologists to ask a question, pitch an idea, figure out how to analyse a dataset or simply find out what tools may be available to use for their project. In this blog post, we want to share what we learned – interesting new projects and challenges in using tech to fight corruption.

While working with the Tech Hub team we were approached by a local Malaysian non-governmental organization with a challenging problem.  They wanted to find a way to highlight corruption around  public officials and their private interests. The Tech Hub developers worked with them to produce http://mystars.sinarproject.org/, a platform that matches the names of politicians with the names of directors from companies that were awarded construction contracts. Users were asked to confirm that the names of those awarded contracts matched the names of politicians. 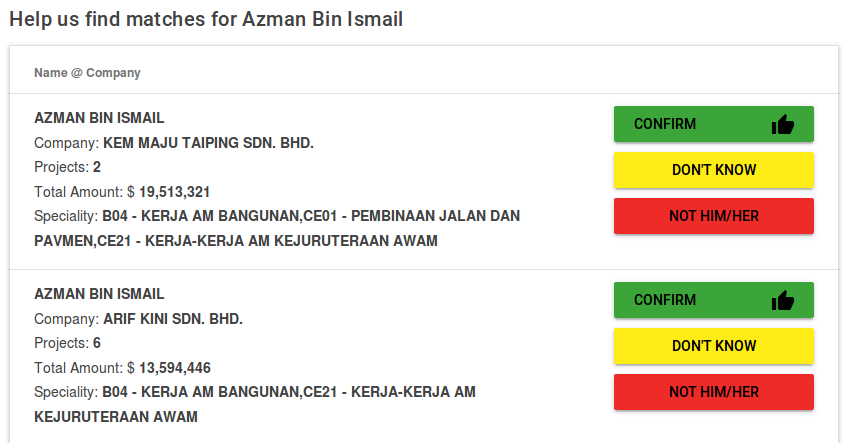 Screenshot of the http://mystars.sinarproject.org/ platform

Takeaways from the conference

There were some particularly interesting sessions, including:

From these sessions, we found the following themes:

Citizen engagement: Although, Ushahidi is still leading the way with anti-corruption mapping. Smartphones are gaining traction with new mobile apps and mobile sites  (for example, Timby and YouKnow) being developed allowing more smartphone engagement and attachment of “heavier” media (e.g. photos, video) to these reports.  Going a step further, a video game is being developed to allow citizens to interactively manage their own budgets to run a city and see what the possible outcomes would be.

Open Data: There is a lot of interest with open data but it is still something new and from the questions asked it is still unclear to many how to implement it correctly. Open Data Census (OCD) is definitely a tool to be considered: it can be customized to fit local scenarios and data categories. Coming up with a formal data standard is one of the main challenges that Open Contracting is trying to solve with contract data specifically.

Online Security and Privacy: Security still seems to be something that is carefully considered when something goes wrong. More awareness needs to be done to teach users to be preventative rather than reactionary to security issues.

We learned about many interesting and innovative projects and ideas being developed to more effectively fight corruption. But we also learned that there is a lot left to do. We’ll continue to follow this network and learn from their challenges and successes.