Pushing for innovation in media: Chicas Poderosas kicks off in Mexico 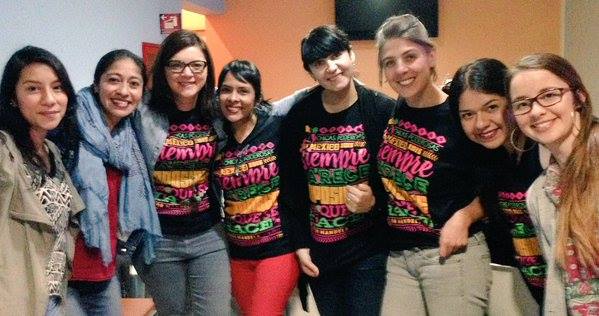 Working with the engine room, we  have had some pretty amazing opportunities to participate in events that remind us of the kind of impact that’s possible when the right people are in the right place. That’s how we felt last month when we attended Chicas Poderosas’ launch of its Mexican chapter. Chicas Poderosas brings together women coders and journalists to work on awesome projects together. This time, over 120 journalists and technologists attended three full days of workshops held in Mexico City. The energy and focus was contagious.

The engine room was part of the organizing team for the event and we were eager to learn from amazingly talented people! This post is a way to share a few of our takeaways from the event as well as some of the exciting new projects that are in the works.

Journalists in Latin America are producing high-quality content both through traditional reporting and increasingly with data journalism, and this event was an opportunity for them to showcase and discuss their work. One example is Ojo Público, a Peruvian investigative digital news outlet. Launched just over a year ago, Ojo Público has used data journalism to track international companies carrying out illegal mining in the country as well as tracking the offshore accounts of Peru´s rich and powerful. It was great to have the opportunity to learn from Nelly Luna, one of the founders of the paper, who talked about how to set up an independent media platform and how data can be used to tell powerful stories.

We were also excited to hear from Alejandra Isunza cofounder of the journalism project Dromómanos. Alejandra traveled throughout Latin America investigating stories on organised crime and drug trafficking. Her stories showed us that these issues are region-wide and not just country specific.

We also heard from the founders from Voces de Mujeres, a media initiative giving women a platform to tell stories about issues that affect them and their community. The women who started this initiative, from rural areas in Mexico, talked about the trainings they recently received on digital media and multimedia production from Social Tic, WITNESS and La Sandia Digital amongst others.

There were so many other great presentations about the power of data journalism from practitioners around the region. Here are just a few of the highlights:

Strengthening the tech-skills of women journalists in Mexico

Getting more women interested in technology in the newsroom is what Chicas Poderosas is all about, so journalists at the event had the opportunity to take a class in programming given by Margot Duek. Margot, a mentor at Devs DF, one of the largest programming schools in Latin America, leads GDG Wondercoders with the mission to teach women how to code. We also had the chance to learn about the fantastic work of Laboratoria, a project that teaches women in underprivileged areas in Mexico to code and later helps them find work placements.

Chicas Poderosas Mexico brought some of Latin America´s most talented journalists together to inspire others to plan and create projects. Here at the engine room we are eager to see what will happen next and we hope this meetup will be the first of many more to come!