Data as a catalyst: Four approaches for exploring political influence

Understanding and monitoring political influence can be complex and interdisciplinary. A few months ago, we shared our reflections from an event, designed with our partner Ojo-Público, where we discussed how political influence develops and grows, and how to co-create solutions using data to track, expose and combat harmful influence.

During the two-day event, a group of experts developed specific approaches they could use to explore influence. These approaches drew from their practical experience, and were created in order to use them in their own work (and see them replicated in the work of others).

We’re excited to share the first drafts of these approaches today. Each one can be iterated on and adapted for specific cases. They document processes that uniquely combine distinct civil society modes of operation – investigation, advocacy and engagement.

How to navigate these approaches

Experts defined specific objectives – inspired by their own work – that then guided the design of an approach to exploring influence. The approaches are different ways to go about conceptualising, understanding and investigating influence. Some offer concrete processes, while others propose questions to guide exploration. Each approach is unique, and not all will be applicable in every situation dealing with exploring political influence.

Each approach serves as a template by which investigators can shape their process, and they are meant to be shared, tweaked and built upon. Three guidelines to keep in mind when using the approaches are:

Investigating corruption at a regional level 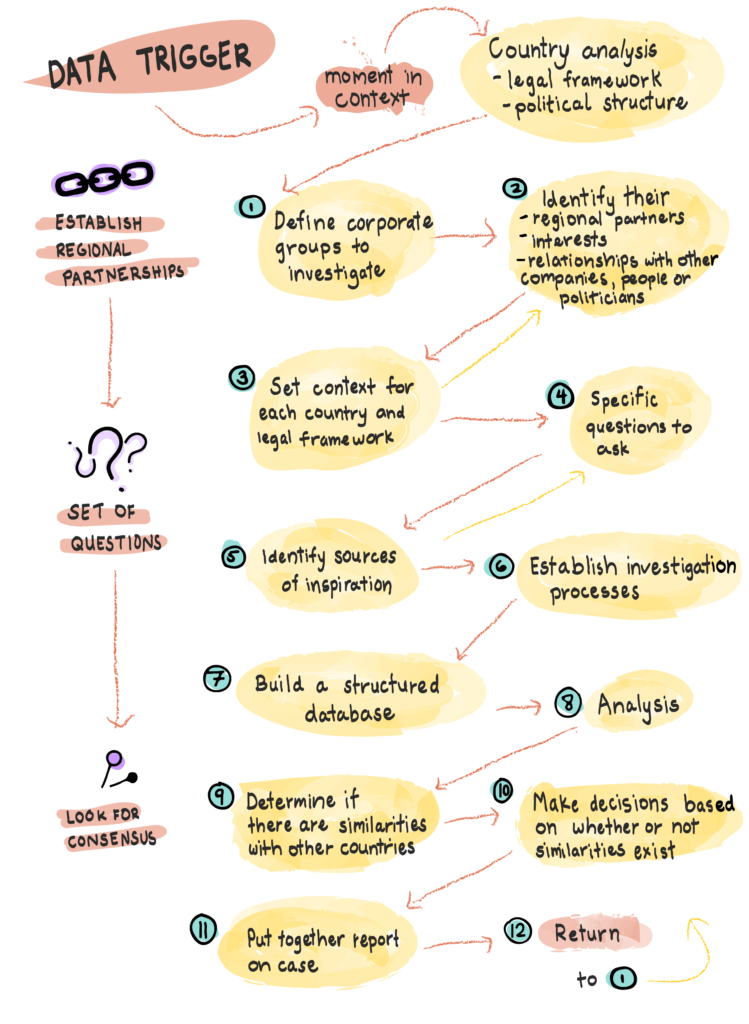 Imagine that a journalist from an online newspaper in El Salvador discovers that the largest retroviral drug provider in that country has also won tenders in three other countries in Central America (Honduras, Guatemala and Costa Rica). The scope of these wins means virtual elimination of all of its competitors. The journalist needs a way to explore these regional trends.

The “trigger” that activates this approach is the information – informed by many data points – that this company has become the largest provider in multiple countries in the region. This kind of growth could be a signal of corruption at play. To explore that possibility requires regional investigation and cooperation. As a journalist involved in shaping this approach explains, “pharmaceutical companies are corporations that intend to become the largest providers in one country, [and] whose activities – if successful – are easily replicable in other countries with weak institutions.”

This approach seeks to enable investigators (whether they be journalists, citizens, etc.) to explore regional webs of influence and potential corruption. It includes three macro-elements for investigation: i) establishing regional partnerships, ii) defining a set of guiding questions and iii) looking for consensus. Each of these macro-elements is made up of specific steps that are often iterative. This structure is based of the principle that corporations act regionally, and therefore in order to investigate corporations, journalists, too, need to think and act regionally. 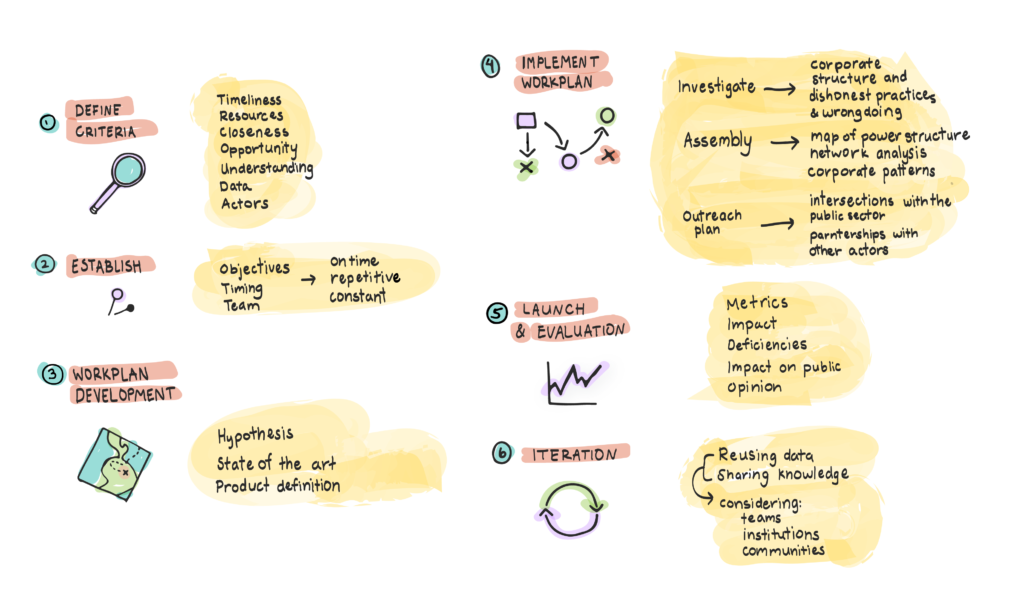 This approach aims to understand the strength or influence that an economic actor can have at a given moment in time. It seeks to reveal three major elements: the functioning of the alleged malpractice structure through the case in question, how common is this within an organisation, and whether it is replicated by other actors.

The investigator’s focus in this approach requires the definition of the issue to be investigated, and the structuring of a work plan based on agreed-upon criteria. Once a workplan is created (step three), it has three major elements of implementation (step 4): investigation, assembly, and dissemination.

Once the approach has been implemented, step six consists of iteration, which requires evaluating the impact and re-framing the work plan if necessary. For example, if research shows that the malpractice is a common one within the organization, or is replicated by other organisations, this could mean that there is a need to revisit decisions made in the assembly stage – which seeks to identify any instances of the identified malpractice – and the dissemination plan. 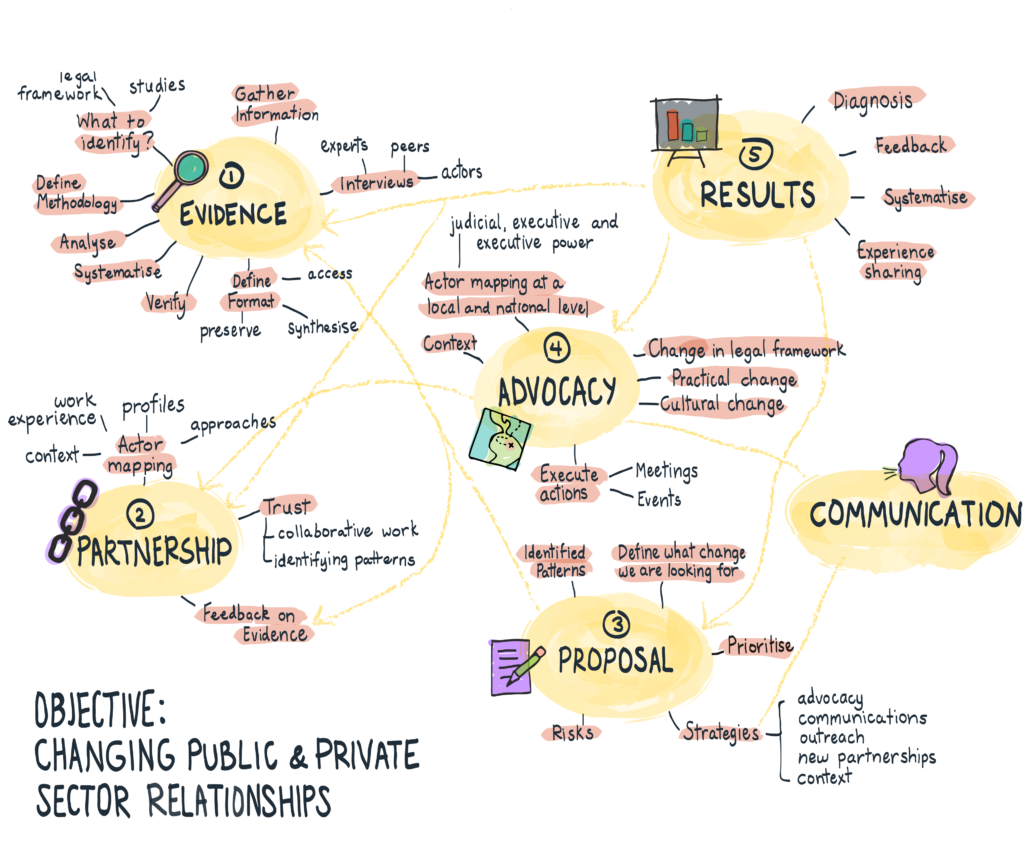 In this approach, the objective is to generate change through targeted advocacy, communications, outreach and partnerships. It is heavily based on research, and walks you through the process of discovering evidence, building alliances, proposing a plan, carrying out advocacy, evaluating results and iterating your whole approach.

It begins with a collection of evidence that initiates the investigation (step 1), and then continues with the numbered steps. Each step is built up through the collection of characteristics that surround it (for example, collecting information and conducting interviews in step 1), which are recommended in order to fully realise each step and collect all necessary data.

In the case of this approach, the arrows indicate that a step will give us information that affects another step. For example, advocacy work can lead us to rethink the alliances we need to mobilise a change. Similarly, any results or conclusions from the process can suggest that we need to revisit our proposal and begin again. 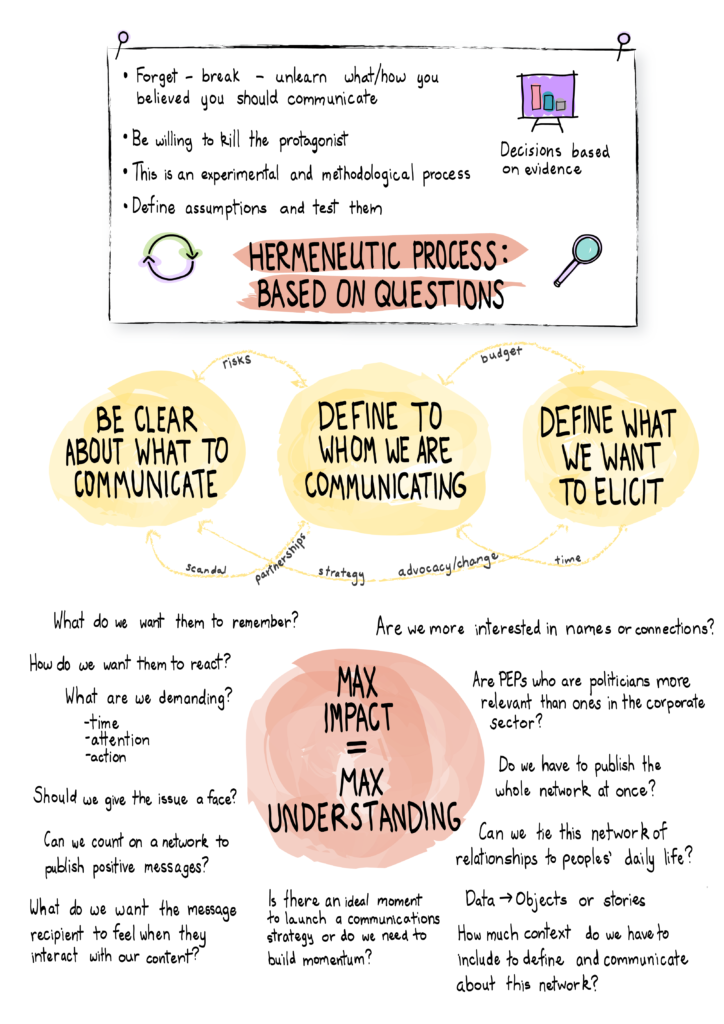 To define these three overarching steps, the team created a series of questions, meant to be undertaken without a particular order. The idea is to ask these questions while exploring a particular situation, with the overarching goal of increasing the understanding of your audience and how to reach them.

Where do we go from here?

This is only the beginning. If you are working on related issues of political influence or politically exposed persons and want to build on these approaches, get in touch with us at paola@theengineroom.org. We’d be happy to put you in touch with the experts who worked on these approaches, and we look forward to brainstorming as a community on how to refine and use them in practice.